Entertainment is no longer restricted to the home or an entertainment venue. The proliferation of entertainment options through digital and online services has changed the way we interact with friends and family and how we spend our leisure time. Each of our technology accelerators has played a role in facilitating these changes. When Steve Jobs introduced … Continued

Entertainment is no longer restricted to the home or an entertainment venue. The proliferation of entertainment options through digital and online services has changed the way we interact with friends and family and how we spend our leisure time.

Each of our technology accelerators has played a role in facilitating these changes.

When Steve Jobs introduced the iPod in 2001 it transformed music as entertainment. It eventually brought about the end of CD retailers, paving the way for music streaming (although incredibly in 2019 sales of vinyl records, CDs and cassettes are growing). Today 80% of music producers’ revenue comes from streaming services such as Apple Music and Spotify.

YouTube streamed its first uploaded video in 2005, and was closely followed by Amazon and Netflix. Improvements in internet speeds and the advent of video streaming services have created a new market for users to consume content. In the US, time spent watching digital video has doubled in the last five years to almost 90 minutes a day and nearly 60% of homes have at least one streaming service. Despite this rapid increase, there is still considerable room for growth as time spent watching digital video makes up only 28% of total time spent watching video generally. 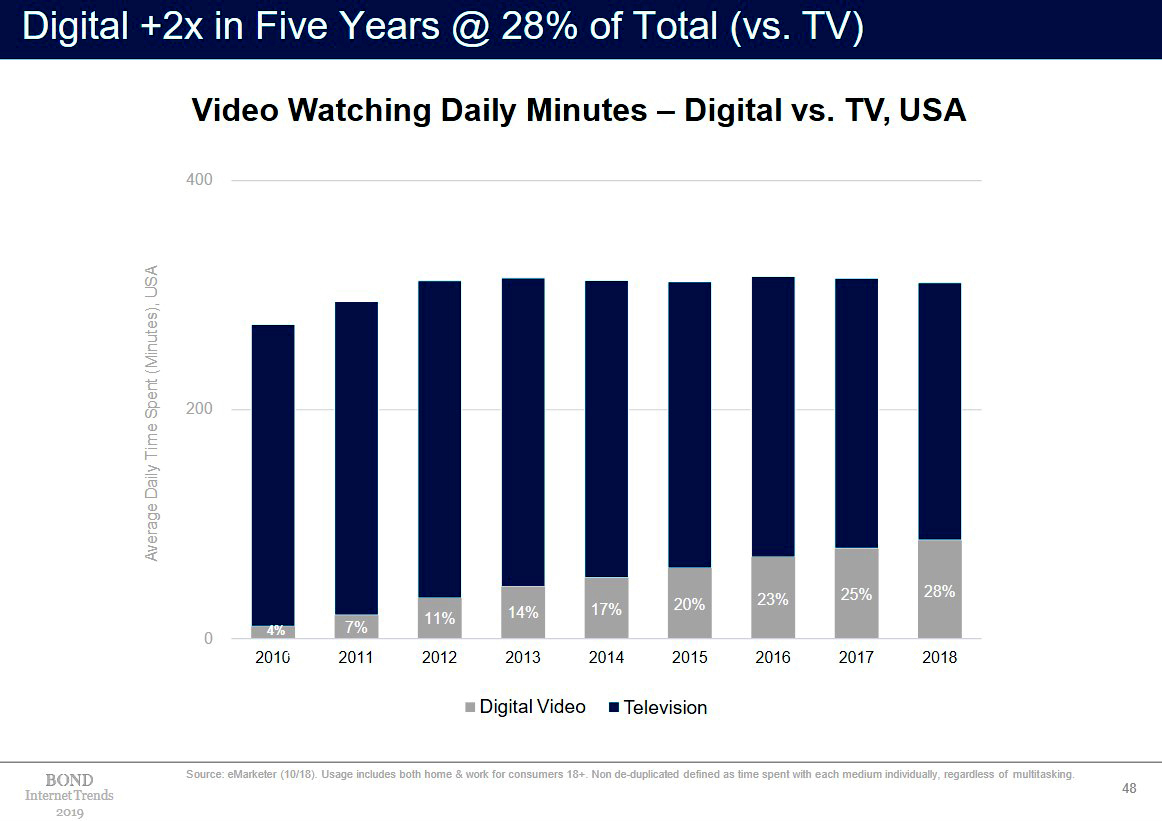 Major cloud providers such as Amazon’s AWS, Microsoft’s Azure, the Alibaba Cloud and the Google Cloud Platform are likely to benefit as demand for content leads to greater demand for their infrastructure and additional services.

The gaming industry is positioned to benefit tremendously from our technology accelerators. Currently worth around $152 billion annually, analysts are predicting a compound annual growth rate of 10% as a result of game streaming, improvements in content production and high speed low latency 5G connections. This will enable users to access games of the highest quality on any device.

Although games can be played on any device, variations in hardware capabilities have restricted high-end games to customised PCs and consoles with substantial computing and graphics capacity. The emergence of services such as Google’s Stadia and Microsoft’s Project xCloud have given gamers the option to play computationally intensive games on devices with relatively limited processing power. 5G should accelerate this shift even further as it speeds data services and reduces latency.

Aside from Google and Microsoft other portfolio companies like Amazon which owns Twitch, and Apple through Apple Arcade are participating in this shift.

AI and automation are set to make games more realistic while reducing the cost of production. Machine learning algorithms such as Procedural Generation and Generative Adversarial Networks will allow developers to create realistic games at a fraction of the time and cost required for current development methods. One example is AI powered ray tracing which simulates how objects reflect and refract light to give ultra-realistic images in real-time.

We have not even touched on the entertainment value of platforms such as Facebook and Instagram where families and friends share lives and experiences empowered by the technology accelerators.