Some of the share price action over the last month has been strange, to say the least. So we weren’t entirely surprised when Netflix was sold off a few days ago after guiding to weaker member growth in Q1 22. Often share registers change hands at inflection points, as investors with less conviction reassess their portfolio. Interestingly, Netflix has garnered attention from renowned investor Bill Ackman. This isn’t particularly surprising, in and of itself, however his comments about the short-termism of the market are significant.

Many of our best investments have emerged when other investors whose time horizons are short term, discard great companies at prices that look extraordinarily attractive when one has a long-term horizon” – Bill Ackman

Netflix fourth-quarter results, announced after market on January 22, caused investors to desert the stock in after-hours trading. The share price fell to its lowest level since June 2020 when its subscriber count was around 190 million, 30 million below the current 221 million. Based on the market response, you might assume the streamer missed significantly on market expectations, but no. The company posted revenue of $7.71, in line with analyst expectations, and EPS of $1.33, which beat consensus by 51 cents.

The main driver behind the share price plunge appears to have been slowing subscriber growth. In the quarter, Netflix added 8.28 million net subscribers, slightly short of management guidance of 8.5 million. In addition, the company projected 2.5 million net additions for the first quarter of 2022, below the 3.98 million subscribers added in 1Q21 and analyst expectations of around 7 million.
The market is highly sensitive to quarterly subscriber number hits and misses, and expectations are anchored to historical trends, leading to the short-term valuation fluctuations witnessed last week. However, our long-term investment horizon enables us to remove market noise and focus on business fundamentals.

Analysts have questioned the sustainability of subscriber growth and the viability of margin growth as streaming competition intensifies, the US market matures, and content costs increase. We consider these key valuation drivers thoroughly in our investment process and routine scenario analyses, and, as seen below, the stock remains attractive over the long-term.

Despite all the noise surrounding the pandemic and intensifying competition, our investment thesis for Netflix remains intact, if not further endorsed by the success of streaming competitors. As highlighted by management during the earnings call, “if you look at Disney+ as an example, the other streaming services out there as well, and their ability to grow even as we’ve been growing as well, I think it’s really strong endorsement for the core idea that consumers around the world are willing to pay for great entertainment.”

While subscriber growth is a key element of revenue growth, we believe the market underestimates Netflix’s pricing power.
Global pay TV revenue peaked at $201 billion in 2016, and many analysts draw parallels between that figure and the total addressable market value for streaming revenue. We consider the comparison to be flawed, because the pay TV figure represents a limited segment of TV households in largely developed markets and featured an inferior user experience. It also underestimates consumers’ willingness to pay, as scarcity of resources and value for money drive pricing power.
As competition intensifies, leading content creators will likely gravitate towards the most efficient content distributors to reach the largest audience base. Netflix’s scale and data-driven investment approach to content enables it to maximise value to subscribers, thereby enhancing its pricing power.

Analysts have increasingly pointed to competition as a limiting factor to Netflix’s pricing power. However, Netflix’s intention to raise prices in the US indicates otherwise. It tends to raise prices strategically when it believes it is delivering a strong value proposition as reflected by key engagement metrics. As noted by management during the Q4 call, “Retention was strong. Churn was down. Viewing was up.” during the quarter. Netflix has a proven track record in its value-driven positioning and pricing approach where it raises prices in mature markets to drive cash flow and offers cheaper plans in newer markets that are scaling.

Focus on the long term

This exposes another concern emphasised by analysts, which is slowing subscriber growth in under-penetrated markets such as Latin America and Asia Pacific. To this point, we believe Netflix’s content strategy will play out in the long run. On an industry level, those markets still have a strong growth runway in terms of broadband penetration, which is still only around 60%.

Netflix has consistently demonstrated its ability to produce quality local content that scales globally (Squid Game), and global programming that competes with theatrical releases for audience and attention (Red Notice). 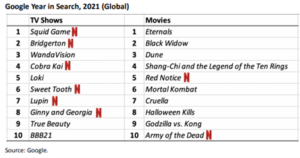 Netflix’s moat will continue to expand and strengthen with an ever-expanding ecosystem of content, creators and subscribers. We believe the company’s proven track record and focus on providing customer value will generate long-term shareholder returns.

Looking back and the year ahead