Originally published in 1955, The Great Crash 1929, provides a timeless reminder of the economic consequences of financial speculation, excess leverage, and herding. Many parallels can be drawn between The Great Crash of 1929 and the Global Financial Crisis of 2008. There are moments in this book where you may mistakenly believe you are reading about the events of 2008. Unfortunately, the Global Financial Crisis was a reminder of our inability to learn from history. If we had truly learned from the past, perhaps the circumstances leading up to 2008 may not have occurred.

In this book, Galbraith provides perspective on the events that shaped The Great Crash of 1929, and the subsequent economic malaise that persisted for a decade. The 1920s enjoyed a pervasive boom, appreciated by every walk of life. From the chauffeur chaperoning wealthy investment bankers to Wall Street, to the investment bankers themselves. The lessons Galbraith dispenses are far reaching and deep. My learnings can broadly be classified into the following themes; financial speculation, leverage and herding. 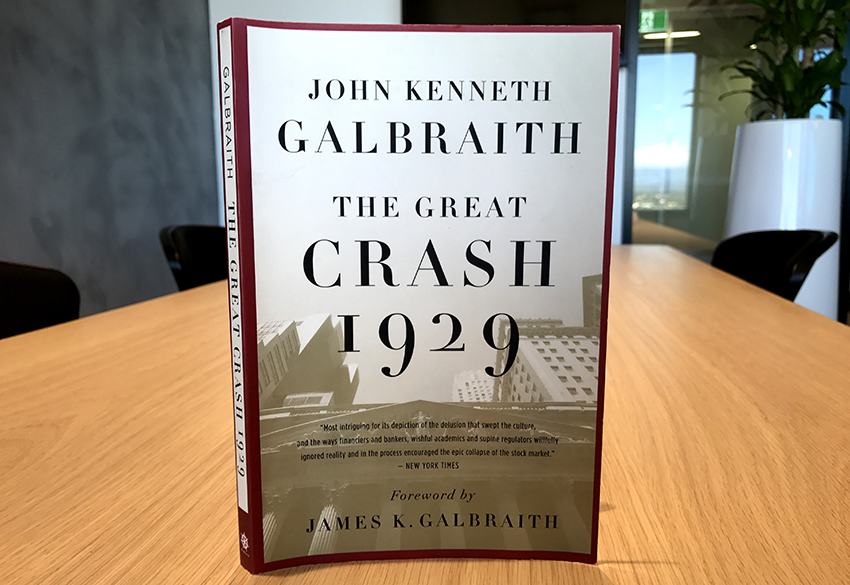 It is interesting to witness the conditions that lead to mass financial speculation. In 1929, and 2007, economic conditions were prosperous, and the mood of the people was positive. In 1929, while the champagne corks were popping, the optimists pumped up the market. Bernard Baruch, the American financier, in The American Magazine noted that “the economic condition of the world seems on the verge of a great movement forward”.

The 1920s was a period of significant economic prosperity. For the first time, more Americans lived in cities than on farms. Strong economic growth created a middle class leading to a rising “consumer society”. Galbraith aptly captures the enthusiasm and distinction of the era in this book.

However, the more prosperous and optimistic we become, the greater the potential for financial speculation. Reading this book, one cannot help but reflect on our own flaws. As humans, we tend to forget past mistakes, then repeat them. Unfortunately, acknowledging these deficiencies does not help to correct them.

However, knowing that we are wired to repeat the mistakes of history is enlightening. It allows the investor an opportunity to try and filter the noise from the market and replace it with healthy scepticism. Galbraith provides a sweeping account subtly revealing sign posts to help investors navigate future market cycles. The largest warning being a buildup in financial leverage.

The crash of 1929 was fuelled by excess leverage, primarily centred around stocks and margin loans. A margin loan is a loan to investors helping them buy shares. Investors used these loans to increase their holdings of common stocks. At the time, some of these margin loans required as little as 10% equity, meaning investors were able to leverage their investment by 10 times. Between 1926 and 1929, there was nearly a fivefold increase in broker loans. This added leverage was used to speculate on the market driving it to unsustainable levels.

Similarly, it was relaxed credit lending standards and excessive leverage that contributed to the Global Financial Crisis of 2008. A dangerous amount of leverage serves to elevate and keep elevated the price of financial assets. It would seem we cannot rely on the regulators to manage outbreaks of euphoria. In the foreword by James Galbraith, he notes;

“The main relevance of The Great Crash of 1929 to the Great Crisis of 2008 is surely here. In both cases, the government knew what it should do. Both times, it declined to do it.” – James K. Galbraith

As investors, we cannot rely on government intervention to identify and carefully incise bubbles. The book teaches investors to be alert to a build-up of leverage in the financial system and the impact on asset prices.

Whether we like it or not, we are susceptible to groupthink. Gustave Le Bon, in “The Crowd – A study of the Popular Mind”, noted that an individual immersed in a crowd for some length of time will begin to take on the thoughts of the crowd. This is the reason we may become euphoric or pessimistic at the same time.

“The sentiments and ideas of all the persons in the gathering take one and the same direction, and the conscious personality vanishes.” – Gustave Le-Bon

This was evident in the in the early months of 1929. The market not only dominated the news of the day, it dominated the culture. The fear of missing out, FOMO, was at record levels.

“The rich man’s chauffeur drove with his ears laid back to catch the news of an impending move in Bethlehem Steel; he held fifty shares himself on a 20 point margin. The window cleaner at the broker’s office paused to watch the ticker…” – John K. Galbraith

A psychological bias known as herding is to blame. There are two primary reasons this occurs. The first reason is the social pressure of conformity which can overwhelm a group of people. The second is the rationale that believes such a large group could not be wrong. Simply, that there is safety in numbers. In 1929 and 2008, this bias was supported by prognosticators, academics and politicians of the era.

Unfortunately, speculation, herding and leverage will again infiltrate the financial market, if they haven’t already. However, being ‘on the lookout’ for these excesses can serve to protect investment capital. I will leave the last word to Mark Twain, the American writer and humorist offering sage advice;

“Whenever you find yourself on the side of the majority, it’s time to pause and reflect.” – Mark Twain

I hope you enjoyed my review of The Great Crash of 1929.

The Little Book of Value Investing by Christopher Browne