Guy Spier may not be as famous as some of the other investors whose books I have reviewed. However, he has managed to deliver an enviable track record since founding the Aquamarine Fund in 1997. Since inception to 2018, the Aquamarine Fund returned 463%, versus a return on the S&P 500 of 167%. A $1m investment at inception, would have accumulated to $5.63m, versus $2.7m had it been invested in the S&P500.

Spier demonstrates a genuine desire to share the wisdom he has learned on his journey as an investor. A journey that began as a brash, Gordon Gecko wannabe, later transitioning to a more enlightened being. It is this journey of self-reflection, that ultimately led him to a once in a life time encounter with Warren Buffett. In this book, Spier delves into his investment philosophy and his deep desire to evolve as an investor. Spier reveals a rich intellectual curiosity, together with a willingness to expose his deeper insecurities. It is this honesty which makes this book my favourite investing book of all time.

A lunch with Buffett changed Spier’s outlook, not only on investing, but also on life. He too, has a desire to return most of his wealth to society. His journey from brash and short-sighted capitalist to a more enlightened mind-set reflects his growth as an investor and as a human. As the title of the book suggests, this is about the education of a value investor. I hope you enjoy this review and some of the themes that resonated with me. 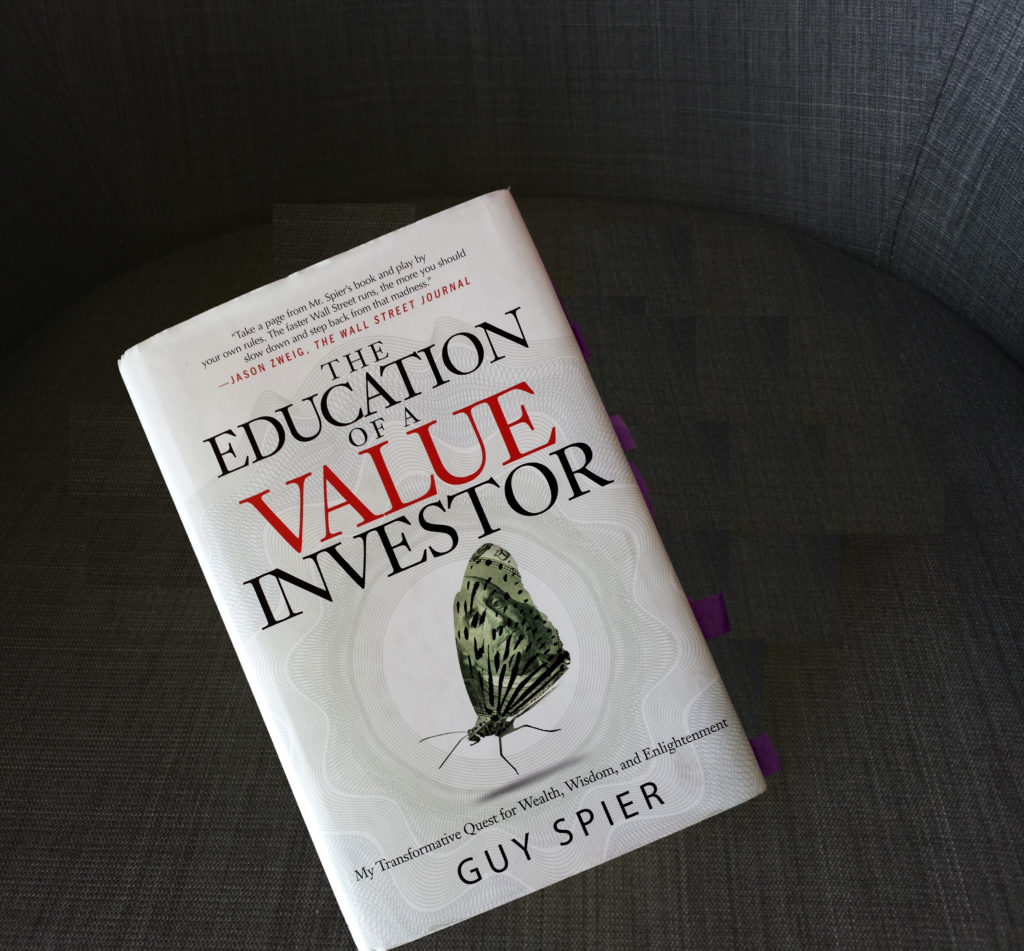 Investment Decisions and the Brain

“People often misguidedly regard the brain as one structure: a neocortex that rationally takes in information, computes it and spits out the answer.” – Guy Spier

Spier devotes attention to a discussion around the workings of the brain. He notes that while we believe each decision we make has been processed by the rational part of our brain, the neocortex, many investment decisions, are processed by the sub-rational part of our brain. This means our investment decisions, may be influenced by our mood, either in a positive or negative way. He notes that Universities do a commendable job at developing our rational decision-making process within the neocortex, however, the sub-rational part of the brain garners significantly less interest. Simply put, our brains are ill-suited to the task of investing.

I touched upon this subject when reviewing Peter Bevelin’s book – where Munger advises us to understand the quirks in our mental wiring in the hope that we can take appropriate precautions. Whilst the science behind the brain is beyond the scope of this book review, it is an interesting subject that is beginning to attract more attention. You may like to delve more deeply into the subject and I recommend “Thinking, Fast & Slow” by Daniel Kahneman.

Cultivating an optimal environment encompasses more than just the location. Spier discusses different themes that together serve to reduce the influence of the sub-rational part of the brain.

“As Buffett taught me, it’s not enough to rely on one’s intellect to filter out the noise: you need the right processes and environment to do so.” – Guy Spier

After spending $650,100 on a life changing lunch with Warren Buffett, Spier reflects on his unique learnings and how he has used this knowledge to benefit his investors. Buffett educated Spier on the power of the environment and its impact on prudent investing. He reminds us that it isn’t enough to rely on one’s intellect to filter market noise, rather we need the correct processes and location to do so.

It was this advice that led to Spier’s relocation to Zurich, a mere six months after the lunch with Buffett. Spier speaks to the virtues of investing outside the financial market epicentres. It has allowed him to foster a greater sense of purpose and perspective with regard to his investing. Spier believes this has aided his performance over the long term. It has also helped him focus on fundamentals and reduce the inevitable market noise that exists.

“Equally important, my family’s money would also be in that one fund alongside my investors’ money. Indeed, I’ve invested almost 100 percent of my net worth in the Aquamarine Fund. As a result, I’m truly eating my own cooking. This alignment of my own interests and my shareholders’ interests is inestimably important.” – Guy Spier

Spier has channelled some of the greatest investors, ensuring that he invests nearly 100% of his net worth in the Aquamarine Fund. It doesn’t take a rocket scientist to appreciate why this approach has been successful. In my review of Peter Bevelin’s book I note that Munger discusses the power of incentive and self-interest. Through this investment, he has consciously modelled Warren Buffett, who has always managed the majority of his wealth in Berkshire Hathaway.

“For the same reason, I find it better not to check the performance of my stocks every day (or for that matter, every week) since this makes it harder to keep a long-term focus.” – Guy Spier

Spier prefers to check the prices of his investments, as little as is possible, generally only once per week. Why? So the sub-rational part of his brain benefits from less stimuli. His seeks to avoid the “call to action” that a flashing share price may invoke. In the Intelligent Investor, Graham discusses the manic-depressive mood swings of Mr Market and the influence it can have on each investor. The simple act of not checking stock prices serves to sever the connection, ensuring that the valuation is less influenced by its price. If an investor is truly taking the long-term view on each investment, why is it necessary to check the stock prices each day?

“Buffett doesn’t hesitate to disengage himself from the world in order to avoid distractions that might impair his judgement. He also told us that he typically avoids meeting corporate management, preferring to rely on companies’ financial statements”. – Guy Spier

Most professional investors seek to meet with company management prior to investing. However, Spier, like Buffett, typically prefers not to meet with the management of his potential investments. Spier believes such close contact with management can be detrimental to his long-term performance. Why? He believes that this may cloud his judgement. Perhaps an authority bias? Instead, he prefers to consider their track record in a detached way, studying publicly available information such as annual reports and investor conferences.

“My routine is to start with the least biased and most objective sources. These are typically the company’s public filings.” – Guy Spier

Spier is a strong advocate for conducting deep independent research. He spends the majority of his research efforts reading the most objective sources of data such as annual reports and other company filings. He openly acknowledges that he rarely reads broker sponsored research.

Some broker research may be conflicted, and therefore bias may be introduced. Furthermore, it is widely disseminated which means other fund managers would have access to this information, potentially creating group think or herding. Spier advises investors to be very careful when using paid research services.

“Over the years, I began to realize that it was a bad idea to speak publicly about stocks that I own. The issue isn’t that other investors might steal my best ideas. The real problem is that it messes with my head. Once we’ve made a public statement, it’s psychologically difficult to back away from what we’ve said.”

You may recall Munger’s speech about human misjudgement. It seems that once we have made a public statement about our investments, we tend to fall victim to the “commitment and consistency principle”. This was also considered in Robert Cialdini’s book, Influence. This public affirmation creates a bias which may inhibit our ability to sell in the future. Spier therefore does not like making public declarations about any of the investments he owns, for fear of falling victim to bias.

My goal with each review has been to share those topics that resonated with me on my own journey as a value investor. However, a different person, reading the same books, would undoubtedly connect with different investment philosophies. Fortunately, there is more than one way to invest. Spier’s journey teaches us to be the most authentic version of ourselves and not a carbon copy of one of the ‘super investors’. Every different process or philosophy will yield slightly different returns, with different risk profiles. As Spier would attest, we are all on our own journey, and I hope you enjoy yours.

Seeking Wisdom: From Darwin to Munger by Peter Bevelin